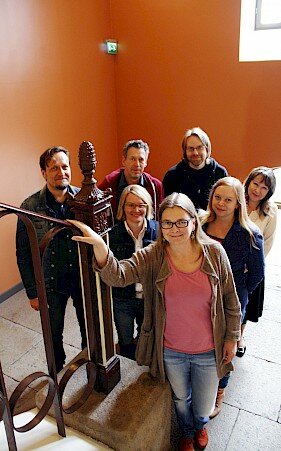 Heidi Grönstrand () is the leader of the research project. Her research interests include the history of multilingual authors and multilingual literature in Finland as well as the institutional issues  related to multilingualism. She is actively involved in developing the Nordic research network Diversity in Nordic Literature (DINO) which focuses, among other things, on questions dealing with multilingualism, literature and language policy.

Ralf Kauranen () is a sociologist who in much of his research has dealt with the comics medium in Finnish society. He has, for example, written on the 1950s Finnish debate on comics and on the transnational connections of the contemporary field of Finnish comics. Kauranen is a founding member of NNCORE - Nordic Network for Comics Research and a former editor of Scandinavian Journal of Comic Art. In 2014, Kauranen's main occupation is research in the project Voice and Silence of Class - Critique of Recent Conceptions (VoxClass), financed by the Kone Foundation.

Mika Lietzén (] has worked in comics as an artist, translator and publisher. His stories often feature several languages; the mixing of languages itself usually becomes a thematic element in his stories. In addition to Finland, Lietzén's comics have been published in, for example, France and Sweden. As a comics publisher at Asema Kustannus Lietzén has edited and published both comics translated into Finnish as well as Finnish comics with English subtitles. For more information, visit www.lietzen.com and www.asemakustannus.com.

Zinaida Lindén [[email protected]] is a bilingual prosaist who writes in Swedish and Russian. She has published three collections of short stories and three novels, i.e. Scheherazades sanna historier (2000), Waiting for an Earthquake (2004), Takakirves - Tokyo (2007), Lindanderskan (2010), Many Countries Ago (2013). Her novel Waiting for an Earthquake was awarded the Runeberg Prize in 2005. Linden received the Swedish Literature Society's prize years 1997, 2005 and 2014 as well as several other prizes. She also works as a columnist, translator and film critic. Linden has published five of her books in Russian, in her own Russian version, in Moscow and St. Petersburg. Her works have been translated into Finnish, Croatian, German, English and other languages.

Olli Löytty ([email protected]) is a literary scholar who has specialised on cultural studies. He has published many articles and a handful of  monographs on representation of otherness in particular and on cultural encounters in general. In his post doctoral project ”Ethnic characters, strange settings and transnational crossings in Finnish literature” (2011-2013), funded by The Academy of Finland, he focused for example on migration literature.

Kukku Melkas () is working as a lecturer in Finnish Literature in the department of History, Culture and Art Studies in the University of Turku. She has been part of  a project called “The Transnational Connections of Finnish Literary Culture” in 2012-2013 and studied the varied connections of Swedish and Finnish literary fields in the 2000’s.

Katri Talaskivi's (katri at student.jyu.fi) dissertation at University of Jyväskylä deals with the position of writers with other mother tongues than Finnish or Swedish in the Finnish literary institution. Prior to her doctoral studies Talaskivi has, among other things, worked as a journalist and as an editor of foreign literature.

Julia Tidigs ([email protected]). In her dissertation Att skriva sig över språkgränserna. Flerspråkighet i Jac. Ahrenbergs och Elmer Diktonius’ prose (“Crossing Linguistic Borders in Writing. Multilingualis in the Prose of Jac. Ahrenberg and Elmer DIktonius”), Tidigs examines the aesthetics and politics of multilingualism in the novels and short stories of two authors writing in Swedish in Finland. In her post doc-project, she explores linguistic norm in the contemporary Finland-Swedish literary field.